At blink!LAB exprimentation is a vehicle with which to pull the future forward.

Attending ACADIA was important to discover what were the emerging thoughts and experiments taking place and what is the current trajectory for design.

​Focus: Managing and manipulation of large and varied datasets

​This was our first participation in ACADIA.  Exhilarating does not approximate this week-long symposium.  We found an international network of digital design researchers and professionals; discovered very critical investigations into the role of computation beyond the architectural endeavor and evaluated that the application of algorithms as an urban planning methodology is still in the nascent phase but promising.

​Result: A fundamental concept for facade panelization, and optimization. A design process which permits a dynamic feedback loop between architects and engineers. ​ ​

We have attended FaçadePlus every year since its inception. This year there were more engineers than architects and what is clear, due to using the same software we are, as design professionals, closer to speaking the same language.  This can only lead to greater collaboration.

As a studio dedicated to research, there is a constant struggle between what's "work" vs "research".  What is the platform that differentiates the two?  2014 was  the year to put the idea of the LAB on its course - to gain greater control through digital fabrication, parametric modeling and information exchange with the wider design community.

Why control? The architectural process is fraught with delays – waiting on the engineer’s energy analysis response, on-site mock-ups for material performance and constructability verification which actually should have occurred early in the design exploration phase, etc.  Frustrating! Costly!

2014 was initiated with a defined objective to achieve greater control over the design process. Starting with the elemental return to the hand and craft at TexFab, the year culminated with ACADIA where we questioned "the capacity for computation to inform or challenge traditional design processes; computation as design operation - the capacity, condition, or state of acting or of exerting power, and/or computation as design instrumentality - the design mechanism through which power is exerted or an end is achieved"*.  This journey into control has expanded our ability to craft more precise fabrication solutions, take a deeper-dive into sustainable optimization, and discussions with PhD candidates were insightful in revealing avenues for the next design thought processes. 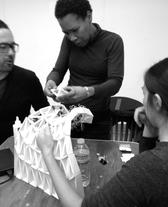 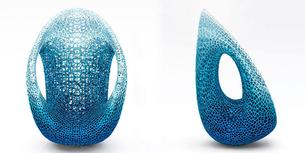